Dr. Anacleto Belleza Millendez, Founding President & Chairman of the Board

He is a medical doctor, a public health advocate, an educator, a social entrepreneur, a philanthropist and a community organizer. He obtained his Bachelor of Arts degree major in Humanities at the University of the Philippines (Diliman) in 1982 and conferred with the Doctor of Medicine degree at the Manila Central University in 1986. He is board certified in Family Practice by the Philippine Academy of Family Physicians, Inc. and is a member of the American Public Health Association (APHA), the American College for the Advancement in Medicine (ACAM) and the American Holistic Health Association (AHHA). Right after finishing his medical internship from the Veterans Memorial Medical Center in Quezon City, Philippines in 1987, he went back to his hometown in Pikit, Cotabato and opened his own private clinic. He later on served as a government physician in the Philippines. He migrated to the United States in 1994 and was connected with McAllen Heart Hospital, Stanford Hospital & Clinics and University of California in San Diego School of Medicine. He is a member of the Knights of Columbus, the Catholic Men's Fellowship in Davao City, Philippines, and the Social Justice Ministry of St. Joseph of Cupertino Parish. He was also awarded as the Most Outstanding Member for Humanitarian and Community Service by the Filipino-American Association of Greater McAllen in McAllen, Texas during the 1998 Philippine Centennial Celebration, and he was also the Hinigaranon of America Awardee in June 2007. Last April 26, 2010, he was conferred with Doctor of Divinity (Honoris causa) by St. James The Elder Theological Seminary based in the USA. He is currently the President of the ABM International Consultancy and the medical director of the Center for Holistic, Alternative & Restorative Medicine (CHARM). Dr. Millendez is married to the former Eleanor Maquiraya Campo of Aparri, Cagayan, a registered nurse at Kaiser Permanente Redwood City Medical Center and they are blessed with two adorable children, Cyril David and Kathleen Anne. Presently, they are residing in Cupertino, California. Dr. Millendez is the youngest son of Corazon Belleza and Francisco Tizon Millendez of Hinigaran, Negros Occidental. Atty. Roberto Belleza Millendez, Vice-President & Board of Trustee
He was an OIC-Mayor of Pikit, Cotabato, a successful businessman, realtor and a practicing lawyer. A cum laude graduate of the Notre Dame University for his Bachelor of Arts major in Philosophy in 1978 as a Junior Oblate of Mary Immaculate seminarian, studied first year law at the Ateneo de Davao University in 1978-1979, second year law at the Ateneo de Manila University from 1979-1980, and conferred with the Bachelor of Laws in 1982 at the Notre Dame University and passed the Philippine Bar Examinations in 1983. A member of the Integrated Bar of Philippines and the Free and Accepted Masons of the Philippines. He is married to a former beauty of Pikit, Cotabato, Mary Liberty Casis and they are blessed with three good-looking lads - Bert Williams, a marketing graduate who is based in Maryland, USA, Bert Alfronte, a  registered nurse and Bert James, an agri-business graduate of the University of the Philippines in Mindanao pursuing further studies in the USA. Atty. Millendez is sixth of the seven children of Corazon Belleza and Francisco Tizon Millendez. Engr. Alberto Belleza Millendez, Secretary and Board of Trustee

He is a retired electronics and communications engineer of the Hyatt Regency Hotel and consultant of Bayview & Cebu Plaza, used to be an active member of the local barangay unit in Ramon Magsaysay, Quezon City and is married to Calixta Ann Gatchalian and they raised three professional children-Alannbert, an architect who is currently teaching math in Sacramento, CA, Laila Ann, a physical therapist based in the USA, and Kristine Anne, a commerce graduate. He is the third child of Corazon Belleza and Francisco Tizon Millendez. She worked for several years with the Social Security System Main Office until she had her early disability retirement in 1995. Currently, she is working as the treasurer for a family-owned construction company. She earned her Bachelors of Science degree in Accounting from Far Eastern University in 1978. She was able to raise three children - Maria Corazon, a psychology graduate from Ateneo de Manila University with Masters in Early Childhood Education from the University of the Philippines and she is currently the guidance counselor at Miriam College in Quezon City, Mark, a graduate of Industrial Technology and now working with NAIA, and Christian, a graduate nurse. She is the fifth child of Corazon Belleza and Francisco Tizon Millendez. 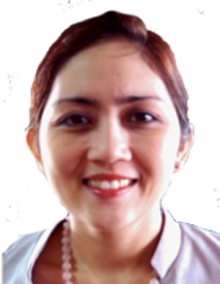 Atty. Maria Rocelle M. Melliza, Auditor and Board of Trustee

She is an alumna of St. Scholastica's College, Manila and De la Salle University, Manila. She got her Bachelor of Arts degree major in Economics and Bachelor of Science in Commerce degree major in Accounting in 1991. She passed the C.P.A. board exams in 1992. After a short stint in the S.G.V. & Co., she proceeded to take up law. She was conferred with the Bachelor of Laws in 2000 at the Arellano College of Law and passed the Philippine Bar Examinations in 2001. She is currently connected with the Department of Public Works and Highways, National Capital Regional Office, as Chief Legal Officer. Atty. Melliza is the second to the eldest grandchildren of Corazon Belleza and Francisco Tizon Millendez.